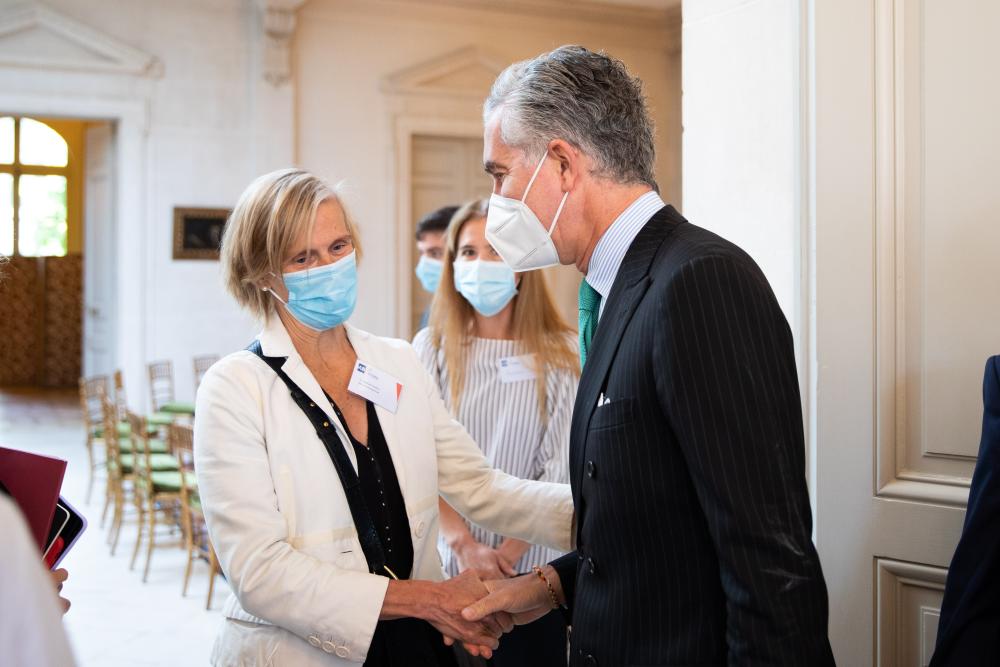 During the introduction of the three new universities at the residence of the Italian Ambassador in Belgium on Thursday, all partners of the EUTOPIA alliance expressed their enthusiasm to put their ideas into action and strengthen the communities’ connectivity.

“We felt a need to go beyond what we promised with this programme and not just to create connected communities, but to create completely different course outcomes for students, in a way, by rethinking pedagogy,” the rector of the VUB, Caroline Pauwels, told The Brussels Times. “It’s a historic step, which integrates education and research models, whilst also encouraging universities to think how they can work together to ensure education is fit for the 21st century,” she added.

Now they have been joined by Università Ca’Foscari Venezia in Italy, Technische Universität Dresden in Germany, and Universidade NOVA de Lisboa in Portugal as part of the EUTOPIA universities’ goal to “strengthen their complementary capabilities,” and to offer students, staff, and researchers more a more “connected range of international and intercultural opportunities.”

EUTOPIA is also expanding to work together with four international universities in Morocco, South Korea, Australia and South Africa.

“This allows us to learn from the best practices from all universities, and to look at how a university and its broader community becomes useful to the flourishing of a region,” Pauwels explained.

As the project is subsidized by the Commission fees for students are less, making the opportunities more inclusive and ensuring that all students have an international experience whilst studying.

Three years after the initiative’s conception, the addition of the three universities marks a turning point for the alliance that will focus on strengthening students’ role in the alliance, as well as ensuring EUTOPIA becomes more ingrained in daily university life.

“Even more attention will be given to student integration, allowing students to become partners as well as actors in this alliance, and giving them a role in the decision-making process,” Marie Marchand, EUTOPIA Student Council President, told The Brussels Times.

“The main benefit of EUTOPIA is that students are part of its governance, which wasn’t the case when universities were first created. This is a student-led alliance and it is definitely about student involvement, which is needed to prepare for a better future,” Pauwels said.

With the pandemic having restricted student movement, the programme also aims to promote student mobility in the form of exchanges that are shorter than those of the Erasmus exchange programme, allowing students to experience multiple countries.

“We want to ensure that our students are future-proof and to do so, we have to focus more on the skills and abilities they learn. We are looking to do this in an interactive way through these connected educative communities,” Luk Van Langenhove, the Rectors Commissioner for international networks, who played a key role in EUTOPIA’s creation, told The Brussels Times.

Pauwels also stressed that one of the main pillars of the VUB is for its students to become citizens of the world, adding that “because EUTOPIA is not just a European but a transcontinental project, it will enhance the mobility of our students, be it physically, digitally a hybrid of the two.”

When it comes to the digital and hybrid opportunities EUTOPIA creates, Marchand pointed to the learning units such as that on sustainability, which are run by professors from various universities and allow students from other universities to interact and work on international projects.

Although the digital aspect of EUTOPIA was always intended to be a big part of the programme, Marchand highlighted that, due to Covid, this was accelerated.

“We are thankful that we were able to use all these technologies, but now it will be even better, as students start returning to campus and we can communicate directly with students and organise physical events and workshops,” she said.

Aside from offering students a chance to experience a broader palette of schools of thought, subject perspectives, and interest areas, Van Langenhove highlighted the increased capacity for research communities.

“If you bring together departments from six or nine universities in one way or another, you have a much greater capacity to do the research,” he explained.

Van Langenhove added that EUTOPIA is currently not looking to expand “for the sake of expanding,” but will more focus on the needs of the programme, specifically when it comes to the geographical distribution of the universities.

“We want to positively contribute to European and global social cohesion by ensuring that there is no brain drain. By including researchers in this type of network and by ensuring that they do not permanently leave their region or country, the chance that certain regions will be boosted by research capacity increases,” he said.